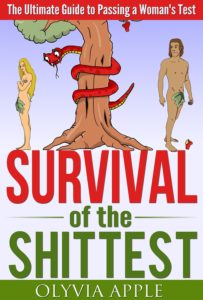 Know What Women Really Mean In What They Say (and Ask)!

Survival of the Shittest

Kindle Amazon bestseller, Survival of the Shittest, sheds light on the widespread and little discussed phenomenon known as the “Shit Test”, in which women subtly test suitors, boyfriends, and husbands.

Survival of the Shittest is the first ever comprehensive guide on the phenomenon pick-up artists like to call the Shit Test, the tests women give men, subconsciously or not, to determine a man’s level of interest, intentions, feelings, and character. Men the world over–single, married or divorced–experience these Shit Tests, often without knowing it, but few understand its source and how to pass them.

Written from a women’s perspective, Survival of the Shittest delves into the mind of a woman to help men understand not only how to relate to her on a variety of levels, but also how to persevere when she gives a hard time with confusing actions and words. Through the lens of the “Shit Test”,Survival of the Shittest teaches men how they can better court women and maintain a happy relationship with the women of their choice.

The origin of the term Shit Test is the subject of debate, but it is usually defined as mildly hostile, challenging, or sly comments or questions that women hurl at men. They can include a woman’s comment on her own appearance, like “this dress was really expensive”; a comment on another woman, like “she is so stunning, don’t you think”; and a comment on a man’s behavior, like “you’re a smooth talker, aren’t you?” These tests can include actions, such as a woman pitting a man against his friend or asking him for a unique favor.

Through a mixture of wit, humor, and wisdom, Survival of the Shittest offers many examples of Shit Tests, and suggested ways for men to pass them. 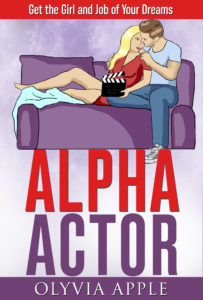 Are you an aspiring actor who also happens to be single? Are you one or the other?

If so, then you could be facing a world full of a lot of confusion, frustration, and rejection…unless you learn to become an “Alpha Actor”. Making it in Hollywood and finding a great girlfriend could very well be two of life’s greatest challenges, and, actually, the process of achieving both is actually extremely similar.

Do not walk into an audition room or a date without reading Alpha Actor!